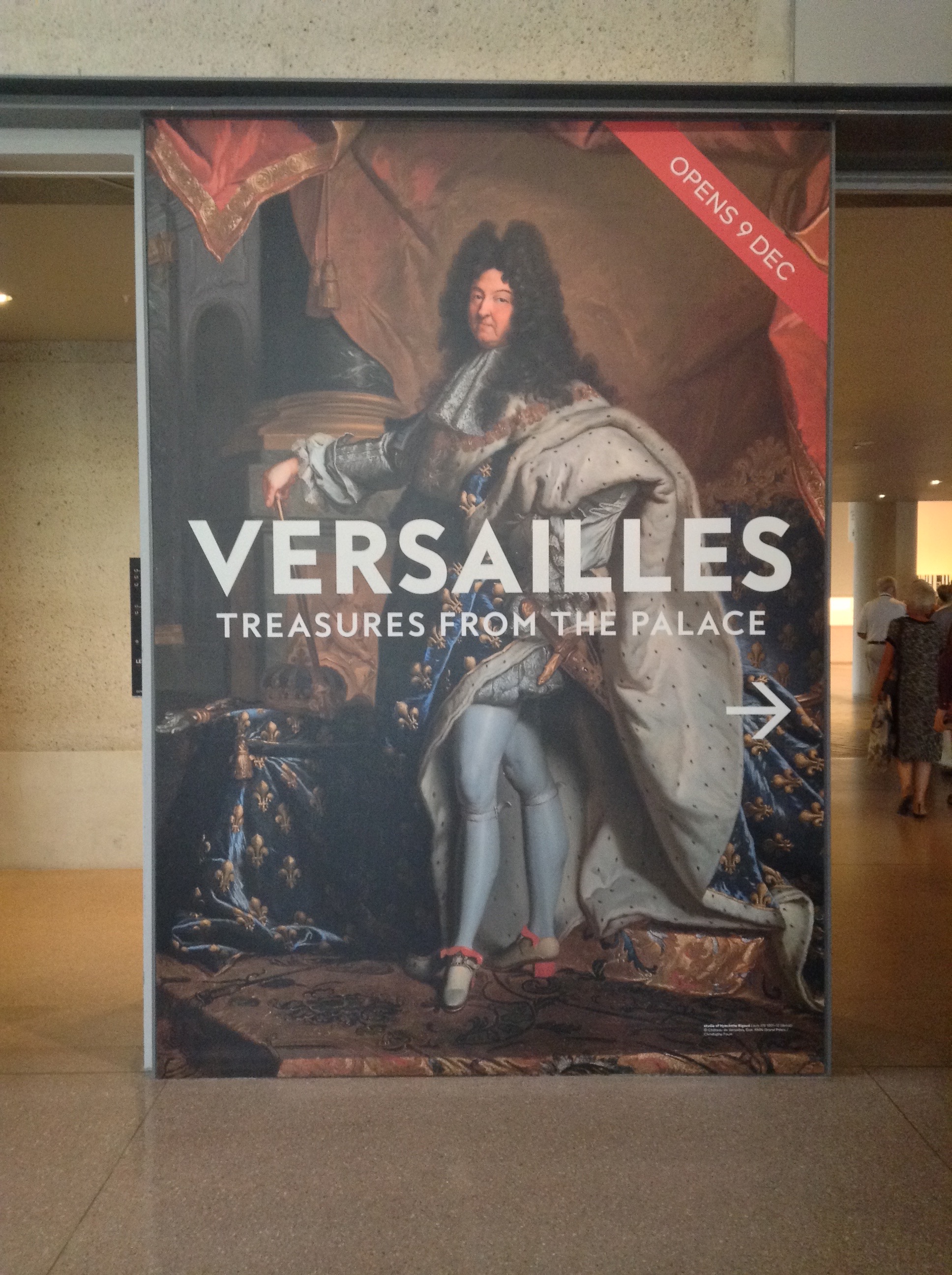 I’d been anticipating it for months, and finally, December had rolled around and it was finally here! YAY! I am talking about the National Gallery of Australia‘s Versailles Exhibit, a joint event run by the NGA and the chateau de Versailles. From December until April, we Aussies get to experience a little bit of French culture, with more than 130 items on display through the years of Louis XIV, Louis XV and Louis XVI with Marie Antoinette.

So with my travelling music on the car stereo, I took off for three days. After finally working out the repeat button on the touch screen (30mins of Fall Out Boy’s Irresistible isn’t that bad) I cruised into an unseasonably warm Canberra and checked into my tiny hotel room.  Not unlike the tiny cubicles at Singapore airport, it had a cramped shower/toilet combo, a bed, small fridge, coffee pot and TV, plus a wheezy air conditioner that didn’t do too well with the 40 degree heat.

Aaaaanyway, excellent accommodations was not what I was here for and so, at 9.30am the next day I rocked up to the NGA half an hour before opening, ready to queue. It was Wednesday, a school week, and surprisingly hardly anyone was there.  Just what I liked. I strode up the escalators and bang! encountered the familiar Rigaud Louis XIV painting in massive poster form, turned right and was immediately hit by a most amazing scent. It is still quite indescribable, a mix of orange blossom flower (Louis XIV’s favourite) and honey and a multitude of other notes my excited nose could not even focus on. The NGA had commissioned Master Perfumer Francis Kurkdjian to make the ambient aroma specifically for the exhibit and damn, I wanted a vial! 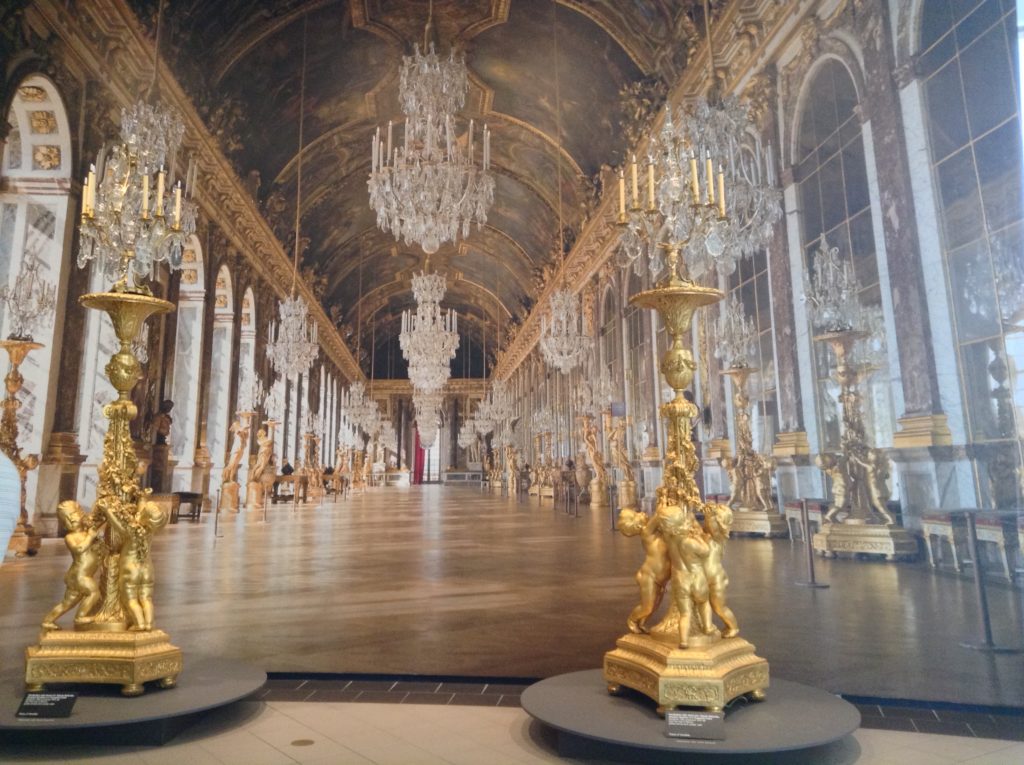 People were already stopping to get their photos in front of the two candelabra which were framed against a huge Hall of Mirrors poster. If it were Versailles, no way would I’ve been able to get a pic sans people. But here, with less bodies about, I waited barely half a minute and got my picture. 🙂 Then I flashed my Golden Ticket (unlimited entry for the entire exhibit!) and I was in. 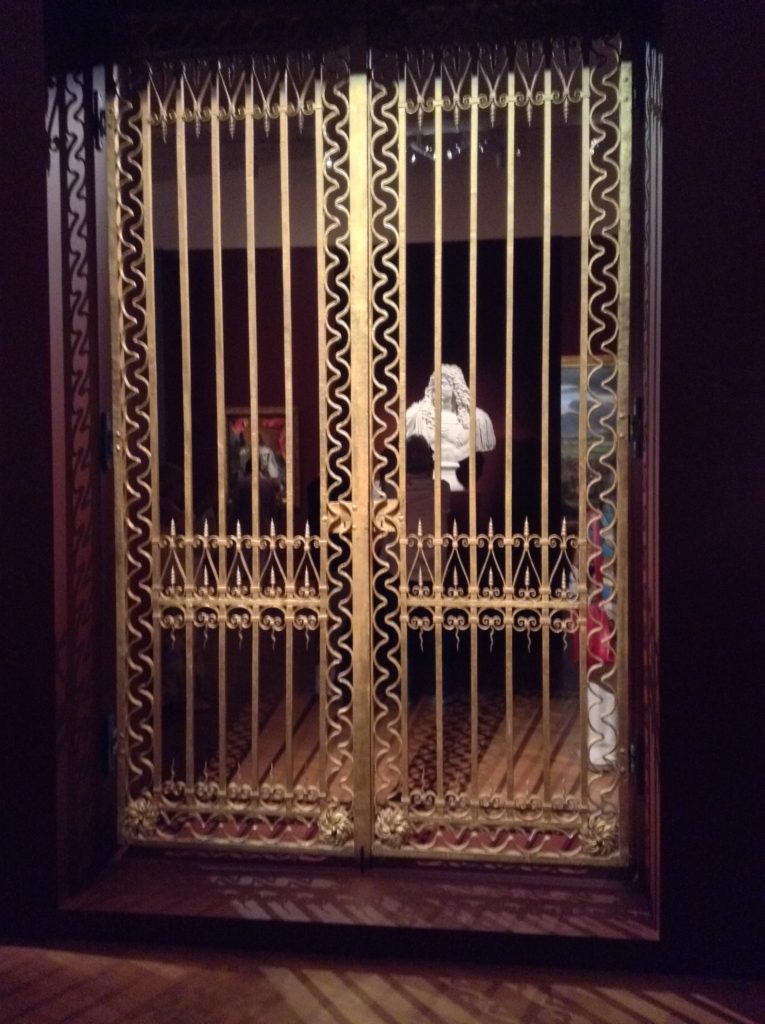 Dark corridors and mood lighting prepared you for the significant luxury of the display to follow, and I realised they had set up the exhibit as if you were walking through the palace. First, were the gates into Hoquetons Hall.  Made circa 1672 in gilded iron by Nicolas Delobel, Hoquetons Hall, in the king’s Grand Apartment, was named after the household guards (who wore a short sleeveless jacket made of thick padded cotton fabric, or au cotton), and was part of the ‘envelope’ extension. The corridors leading from the hall were bricked up in 1724 and only re-opened early in the 20th century, so the gate is some of the oldest ironwork in Versailles and still with its original gilding, despite being hidden away for centuries. 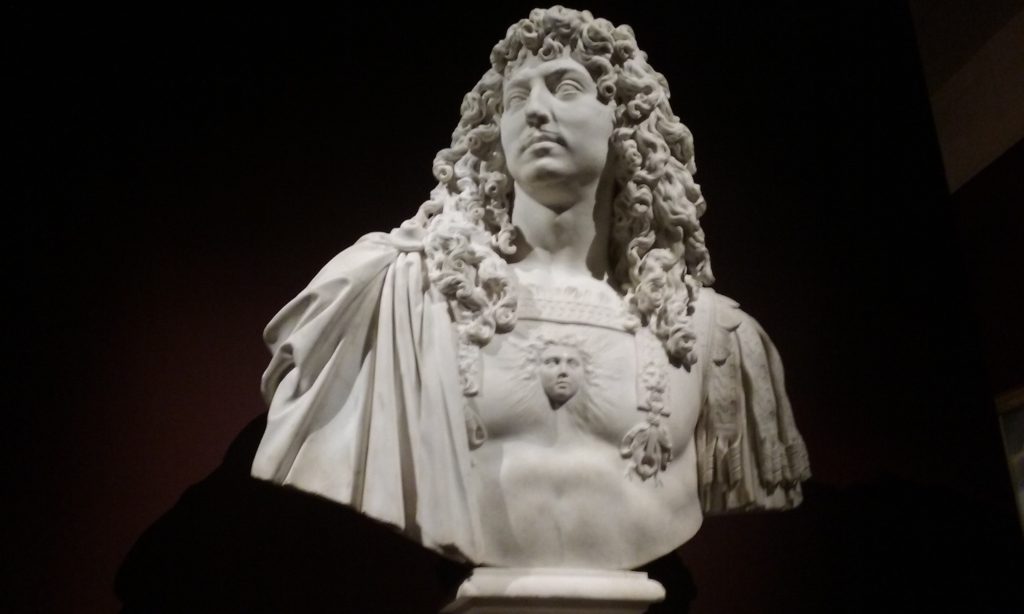 Past the gates was the Warin sculpture of Louis XIV as Apollo, almost as if haughtily welcoming you into his domain, then a few Gods, some Italian 16th century bronze heads, a bronze Venus and Adonis (the 1680s was known as the ‘bronze period’ at Versailles), then a display of paintings depicting Louis XIV in various historical scenarios (van der Meulen’s March of the king’s army on Courtray, Pezy’s Receiving the oath of the Marquis Dangeau) I must’ve looked a little crazy, grinning like an idiot at every single item, mumbling under my breath as I recognised familiar paintings, sculptures…. I think I actually gasped aloud when I saw the Audience with Cardinal Chigi tapestry (the last time I saw it, it was hanging in the Louvre). There were other tapestries, the carpet from the Louvre’s Grande Galerie, massive bronze vases that were commissioned to hold Louis’ orange trees, and designed by Claude Ballin (he of the silver furniture fame, all of which did not survive the Great Melting to Fund Louis’ Wars, sadly). Delicate items in cabinets and behind glass – like the Bust of Marie-Thérèse (c1666 made from gilded bronze, ebony and black wood, by Pierre Gole (1620-1684)). It was the only surviving bit off a pair of cabinets executed for the Apollo Gallery at the Louvre – one dedicated to war (decorated with the king) and the other to peace (with the queen). They commemorate the 1659 treaty between France and Spain, including the marriage of Louis XIV and Marie-Thérèse of Spain. The queen is shown on a pedestal emblazoned with her monogram, the royal crown and trophies representing strength and justice. 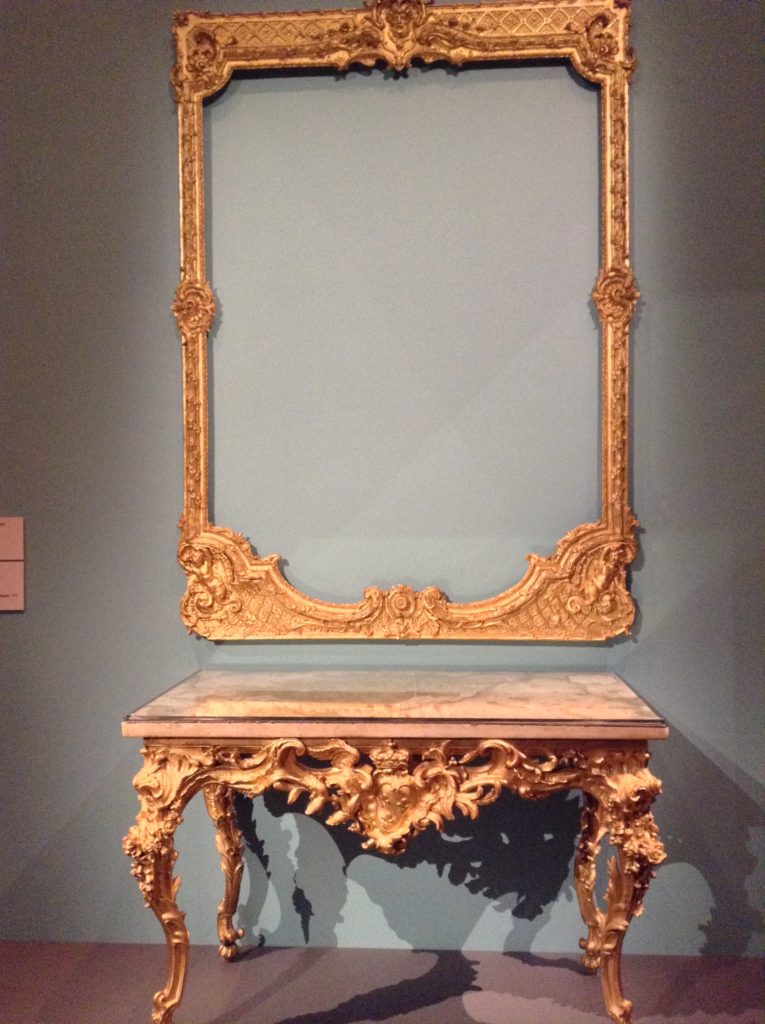 There was a glorious golden hunting frame, made in 1736 and from carved and gilded wood, and attributed to Jacques Verberckt (1704-1771). The hunting table with map of Compiegne is dated 1737 and made by Francoise Roumier (sculptor), Gaspard-Marc Bardou (gilder), Joseph Ducy (Cartographer).

More intriguing items – a perfume fountain from the wardrobe of Louis XV (circa 1743). Louis XV’s Versailles was known as la cour parfumée (“the perfumed court”) to combat the many horrible and pungent smells throughout the rooms, salons and on people themselves. Louis’ mistress Madame de Pompadour loved perfume, and her yearly budget was 500 livres (which is close to $64,000US today).

It was time to walk through the gardens, a darkened passageway full of hedges that with every turn, revealed a garden sculpture of significance, then the plans for the fabulous Marly machine, an engineering marvel designed to transport water to the many garden fountains.  And then the walkway opened up onto a glorious sight – Latona, in all her glory, in the middle of a CGI-display of cascading water (complete with running water sounds).  Looooook! 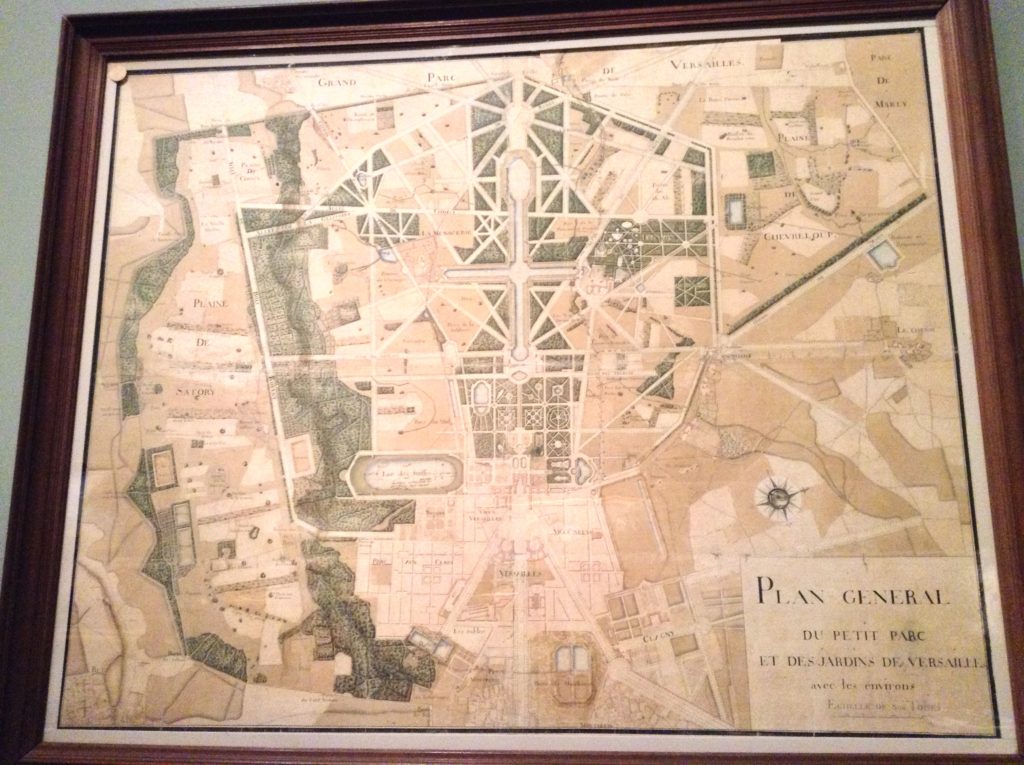 I was especially taken with the garden design plans  – each were painstakingly hand drawn and with such skill and elegance. They were truly works of art (and would look fabulous on my bedroom wall 🙂 )

After the garden plans came the familiar set of Francis Lepautre drawings that depicted Louis XIV’s famous Divertissements – days upon days of partying, pleasures and spectacle.  His most famous three mega parties were held in 1664, 1668 and 1674 and the latter stretched out over three months(!), ending with a massive fireworks display on a floating canal structure. These celebrations were so huge they required a special department to organise them – the office of the Menu-Plaisirs.

There were a set of paintings that detailed the Versailles throughout the centuries of rule, and I loved seeing the way the fashions and hairstyles changed 😀 Amongst all the French fabulousness, I managed to find a little bit of Australia/France relevance in this painting.  Louis XVI points to a place on his map (Australia!). La Perouse is wearing his navy uniform of red pants and blue jacket and is about to sail south to Australia. For those unfamiliar, La Perouse is quite the posh oceanside neighbourhood, just south of Philip Bay in Sydney. 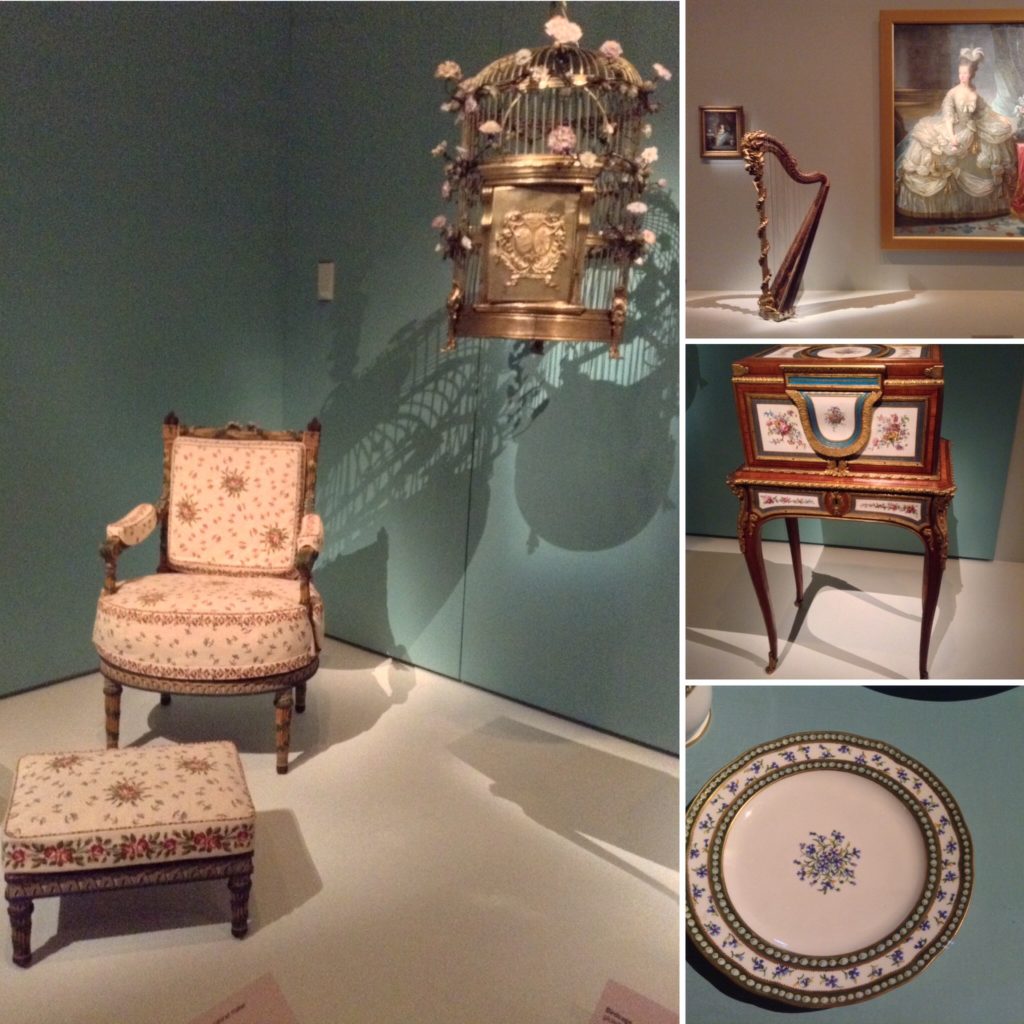 Soon  the familiar Louis XIV items gave way to his heir and grandson, Louis XV and then Louis XVI (the Sun King’s great grandson) and Marie Antoinette. The sudden and obvious change in fashion depicted in each made me smile…. Baroque morphing into the more flamboyant Rococo, accompanied by towering powdered wigs, wide robe a la francaise and embroidered silks and satins. The decorations and embellishments so obviously Marie Antoinette, with flowers and foliage and intricate feminine detailing. Just look at her things! The items are much more lovely in real life and I spent some minutes just staring longingly at her jewellery cabinet.  Here, you can too.

As I made my way through the exhibit, taking in every single item – from paintings, sculptures, maps, furniture, parquetry floor…. – what struck me most is the care and delicacy the artists and creators put into each piece. The fans and the gorgeous hand-painted artwork.  The plates that have been intricately designed. Tea sets and jewellery boxes and carved wood, perfectly embroidered upholstery. Even the menus. 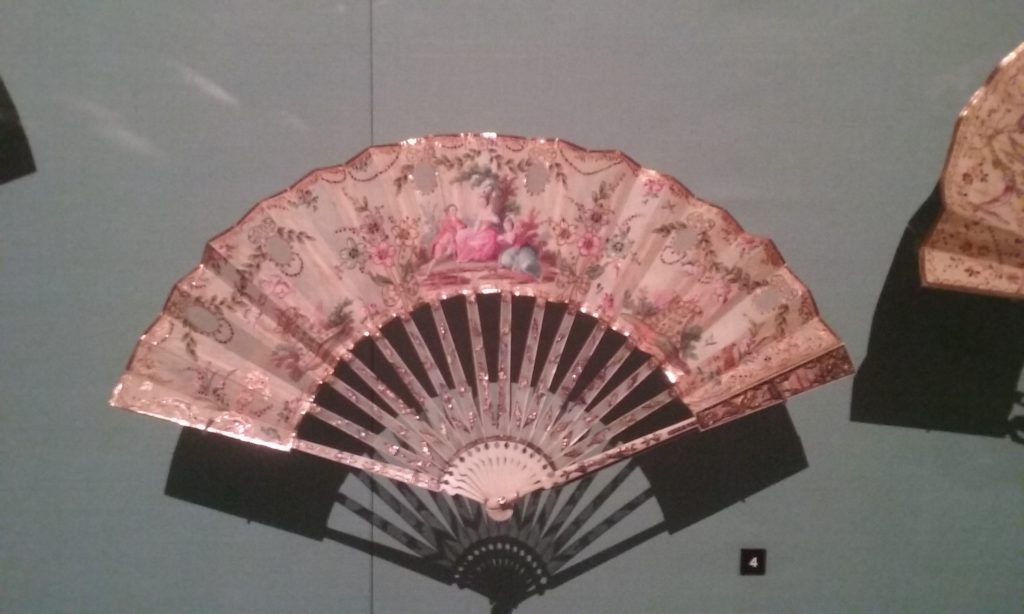 After a turn around the glass cabinets that housed the delicate possessions of Marie Antoinette – coffee grinder, jewellery boxes and fans – there was a brief summary of Versailles during the French Revolution (not fun reading) and then it was to the exit… and sweet, sweet merchandise!  Just look at all this glorious stuff! 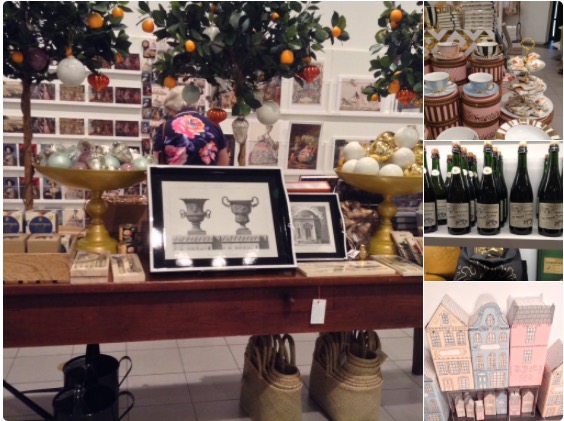 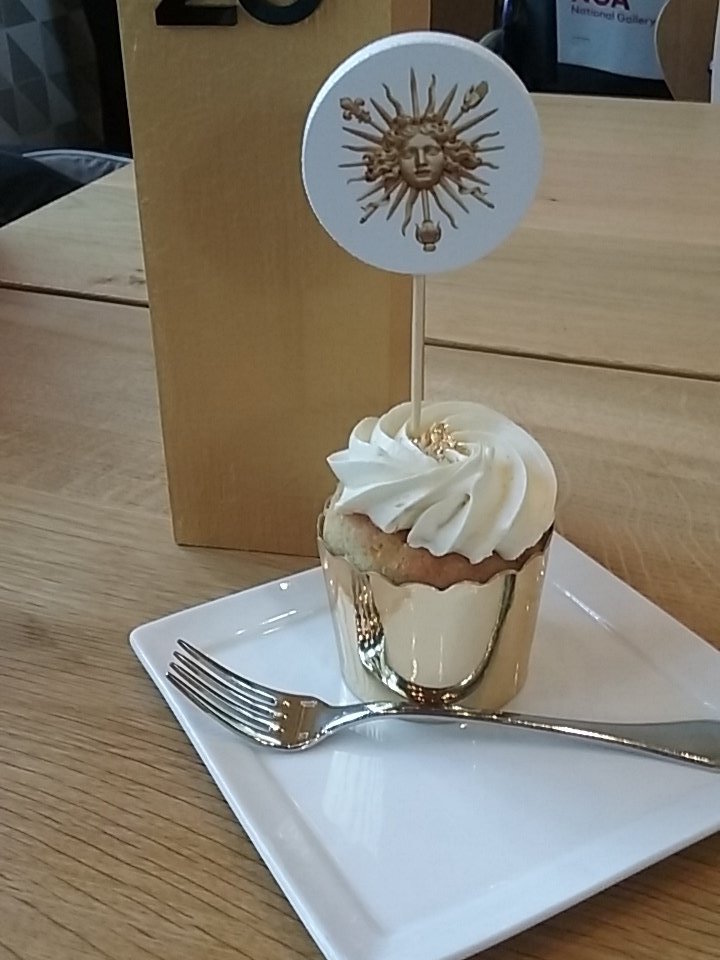 Even the cafeteria got into Versailles mode, with French cheeses, food and this gorgeous cupcake that I could not go past.

And yes, I did buy just a few things to celebrate my visit 😀  Next trip? In two weeks. I am hoping the glorious scented candles will be on sale.

5 thoughts on “The one where Versailles comes to Australia”