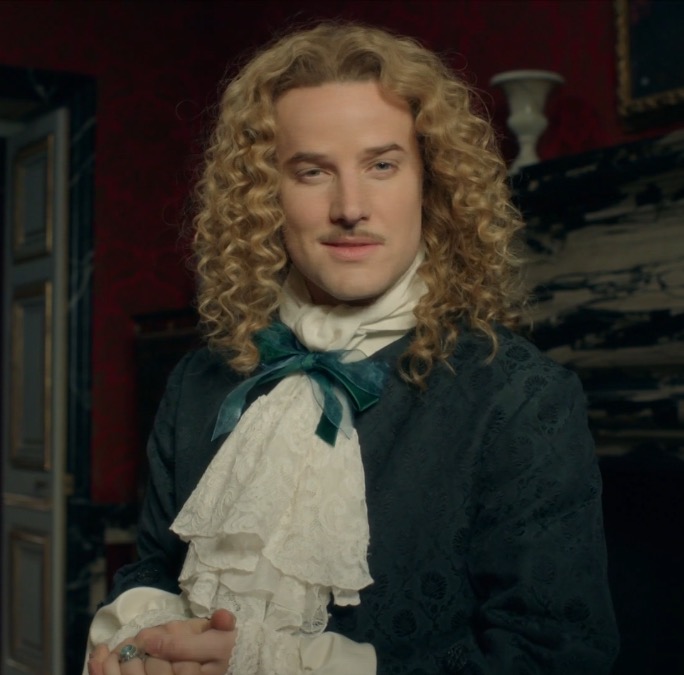 If you can count on anything, it’s Danish cheese to be excellent, Aussies to be obnoxiously “AUSSIE AUSSIE AUSSIE!” at sporting events and the British tabloids to get all outraged and ‘OMG how very DARE THEY!” when it comes to nudity on television. And Lordy, do they LOOOOOVE getting all apoplectic about Versailles. The news du jour (well, this week) appears under a fakery-news headline “BBC’s Versailles ‘axed as viewers bored of sex scenes’” like some common Daily Mail. This is so very wrong in all sorts of ways – to start, Versailles isn’t a BBC show, and Reporter McFakerDouche also conveniently forgot to include iPlayer figures in their numbers. Steve Jobs is weeping as we speak. And CanalPlus, the Real Mom of the show, has said all along they only commissioned three series so there.

Also, just like their Russian bffs, the US have taken to chopping scenes from Season 2, and a lot of those missing scenes include the Chevalier/Philippe. I have been told it is so Ovation can accommodate the ads, so obvs not NO COLLUSION YOU ARE THE COLLUSION against any glorious gay agenda that would frankly be only as evil as a “You Must Wear Gold Spandex Disco Pants on Saturday Night” law.

So here we go, people. My list of all the sexy bits in Season 2, which runs for a total of 535mins (nearly 9 hours). And as per Season 1, I will include nekkidness, kissing and touching and any kind of violence that is supposed to be hot and sexy, and any violence that is sexual in nature (but not necessarily a turn on).

Episode 1
About 6mins in, William of Orange gets briefed by his spy on where everyone in France is. We see Philippe, duc d’Orleans in bed and awake, staring at the camera, which pans back to reveal four other boys in the bed, asleep and nekkid. We see two nekkid asses.

15mins in – Nekkid and pregnant Montespan is being spooned behind by louis in bed. We see her belly and her boobs and as she gets out of bed, a full frontal, crotch and all. We also see Louis from the waist up as he gets out of bed, then nekkid Montespan again, then Louis side-on, still nekkid, as he tells her not to eat the food.

41mins along, Montespan is in a bath, and we see nekkid boobs. She then steps from the bath and there is full frontal female nekkidness and suggestive talk about having teh sex. After another scene we return to Louis and Montespan and this time they are both in the bath, clearly post-coitus. Lots of Montespan boob action as they chat.

Episode 2
2mins in, Louis enters Montespan’s rooms and gets undressed. We see his bare chest and then his face in the throes of passion, and it’s clear Montespan is performing oral sex. They then engage in missionary position coitus in bed: Montespan is clinging to the bed head, there is lots of thrusting and screaming as we see Louis nekkid from behind (with bare ass) and Montespan’s boobs and heavily pregnant belly.

About 5mins in and we have an scene of extended man nekkidness. The Chevalier embracing Philippe in bed, both bare and in an obvious in a state of post coitus. This morphs into an arial shot of them both in bed, their modesty preserved by sheets, the Chevalier rolls and takes a sheet with him, and it is strategically placed to cover his crotch and Philippe’s bare ass. The Chevalier kisses down Philippe’s bare back to his ass, smacks it, then exits the bed nekkid and thanks to skilful camera work, we only see him from the waist up, all damp-chested. The Chevalier takes a glass of wine and preens nekkid in front of a mirror (only shown from the waist up) as Philippe saunters to the window and we see a full back shot, bare ass and all. The Chevalier wanders over and we see his, too. The Chevalier pees into a chamber pot as a servant holds it, but it’s all (again) chest up, although we hear the sounds.

3 mins later, we see the Chevalier snorting powder, staggering over to a half-dressed mignon to share it, and then walks off. Through a salon door we see other boys are lounging about, also half-dressed and presumably under the influence too. After some conversation with Philippe outside, he and the Chevalier share a deep kiss.

In a montage of merriment and debauchery about 24mins in, we see Thomas kneeling in bed, in his shirt, and sharing powders with two girls, who are in their underthings. He kisses one, then encourages the girls to kiss.

39mins, The Chevalier goes to see Claudine for a medical issue. She inspects his groin (the camera remains on his face… cold hands!). 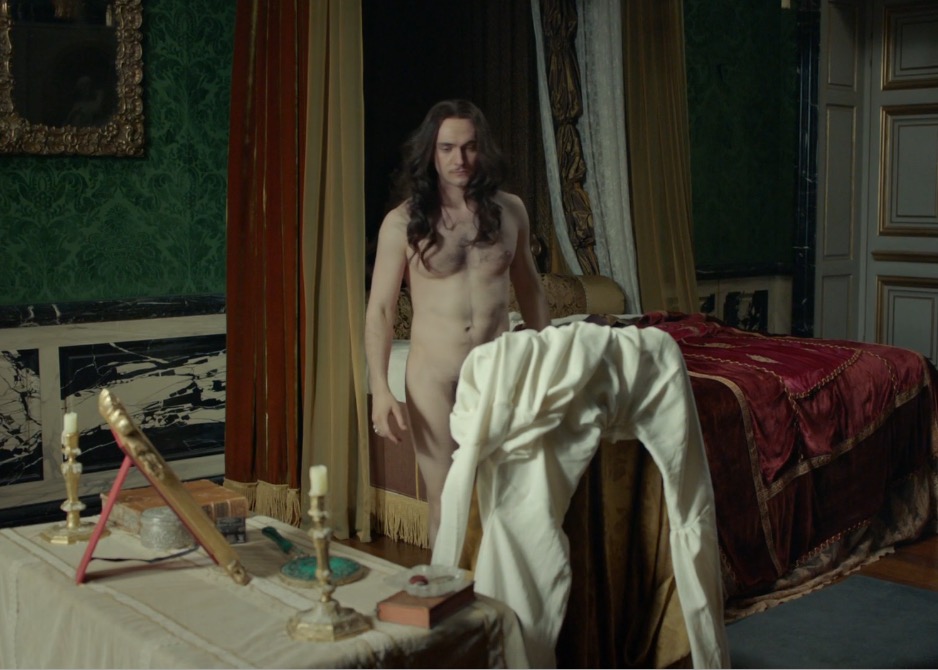 Episode 3
2 1/2 mins in, Louis gets out of bed, fully naked. we see a bare behind, and thanks to skilful camerawork and a strategically placed chair, a bare hip.

Right after the intro, we see Marchal visit the supplier of powders to the nobles, and three girls (with dresses on) are lounging about on beds.

10mins in, Philippe is being dressed, and the Chevalier lounges sleepily in their bed. The Chevalier gets out of bed and goes to Philippe, kisses him then drops to his knees, but they are interrupted by Bontemps. After Bontemps leaves, the Chevalier obvs expects to resume, but Philippe walks off.

The Chevalier goes to see his drug supplier and the man’s cute offsider, there is some playful banter about having fun and paying to be flogged.

Bontemps walks through the servant’s dingy corridors and catches Gaston shagging his servant girl Odile against a wall. They are both dressed but there is lots of violent thrusting and the girl is not enjoying it at all. She locks eyes with Bontemps.

35mins in, the Chevalier lounges on the bed while Philippe dresses, consuming drugs.

Louis announces the bedding ceremony for Philippe and Liselotte, and the Chevalier, still high, makes a grab for Philippe’s crotch, saying “Remember. it belongs to me.”

Liselotte and Philippe appear in nightgowns then get awkwardly into bed. After everyone leaves, Liselotte slides a hand under the covers, over Philippe’s crotch, in an attempt to get things started, but Philippe rolls over and goes to sleep.

The Chevalier is drinking more drugs in a tavern, while half-nekkid ladies and men dance and cavort in a slo-mo shot.

Louis goes to see Montespan and they have a nice snog in bed.

50mins in, Marchal and Claudine share a close moment and an almost-kiss.

Episode 4
About 6mins in, Liselotte tells Sophie about her disappointing night, that Philippe told her he prefers men. Sophie asks what will she do, to which Liselotte replies “a LOT of horse riding.”

The Chevalier visits his drug suppliers, and in the background, some women and men lounge in a state of undress.

Cassel takes his conjugal rights with an unwilling Sophie – he ties her hands and she fights him in a very uncomfortable but brief rape scene. We see her walking into Liselotte’s room with blood on her nightgown.

48mins in, Montespan grabs Father Pascale by the crotch.

Romantic scene with the Chevalier playfully tossing Philippe onto the bed, then kissing. Interrupted by Bontemps.

Philippe, in a state of anger, finally consummates his marriage. The camera is at Philippe’s back as Liselotte hitches up her skirts, he undoes his breeches and does his duty. Nothing is seen in the way of flesh, just coitus motions and some grunting.

Topless Philippe is shown sprawled across the bed with a strategically placed sheet covering his groin.

Claudine walks through a brothel. Brief shots of topless women are shown.

Sophie and Thomas meet in secret and there is kissing, then the camera cuts away from what is obvs coitus preparations fully clothed, up against a wall.

Episode 6
Cassel yanks a fully dressed Sophie across the bed, intent on raping her, but she bites his mouth. He smacks her across the face then leaves. Not remotely sexy.

Marchal enters a Paris brothel, and there is much moaning and groaning, topless women and motions of coitus from side-by-side beds. The light is low but it is clear what is going on.

Inebriated courtiers strip on their way to the fountains. One topless girl, the others in a state of undress (no shocking display of flesh).

Party goers stumble back inside, some expanse of leg is shown by the women wearing just shirts.

A long shot of Colbert dragging his niece’s body from the water and her shirt clings, revealing boobs. Not remotely sexual.

Episode 7
16mins in – Montespan in the bath, nipple shot. Full frontal shot (complete with merkin) as she rises from the bath. Camera goes from fully clothed Scarron back to nekkid Montespan two times.

A nun’s boobs are seen as Louis removes her top undergarments and is about to kiss. No kiss, no boob touching (only an arm stroke) is forthcoming, and the scene ends with topless nun having a blanket wrapped around her.

Episode 8
7mins in, Louis takes a bath as he talks with Philippe.

42mins – Marchal sees Bontemps meet a prostitute at the brothel. They fall on a bed before the door closes.

Episode 9
Around 30mins in, we are at a sacrificial alter and Montespan drops her robe to reveal her total nekkidness, then lays on her back on a stone alter. Blood drips on one boob but the sacrifice is ultimately stopped by Marchal and Montespan grabs her robe and runs away.

Louis and Maintenon share a slow kiss in his small prayer room.

Philippe lays on Thomas’ bed and reads aloud. Thomas joins him, his hand goes to Philippe’s breeches and then straddles him. The camera pans up but we see Thomas’ head and Philippe’s expression as Thomas performs oral sex.

Louis kisses Maintenon in the gardens.

Episode 10
Brief scene with Montespan topless in her rooms and scrubbing furiously at her skin to remove the blood.

Louis stomps into Montespan’s room, where she lays in bed. They chat a bit, then she slowly removes her night gown and we see everything, nekkid boobs and merkin, as she slides back onto the bed and encourages Louis to follow her. He crawls between her legs, fully dressed, and kisses from her belly up between her boobs, then they kiss, then he shoves her away and walks out.

Thomas kisses Philippe in the gardens, Philippe suggests a shag but Thomas is all “maybe later.”

Louis and Maintenon snog in the gardens, in full view of the guards, until she stops him.

Philippe snogs Thomas then pushes him back on the bed, before Philippe reveals a hidden dagger (literally, not metaphorically).

Philippe and the Chevalier share a tender kiss before Philippe leaves for war.

One thought on “The one with Versailles’ Season 2 sexy bits”